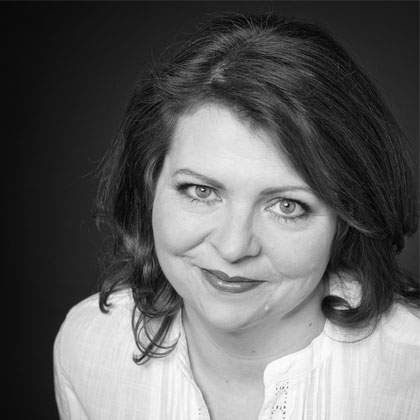 Yvette Cummings (Dip TCL) studied at Trinity College of Music, where she won the Wilfred Greenhouse Allt prize for Oratorio and Cantata and was runner up in the Elisabeth Schumann Prize for Lieder. Yvette was chosen to take part in master-classes given by Dennis O’Neill and Sarah Walker as part of the Covent Garden Festival and Glyndebourne.

Yvette made her Sadler’s Wells debut singing the roles of Filipievna (Onegin), and Lucia (La GazzaLadra). She returned the following year to sing the role of Lady Deborah (Robinson Crusoé). Other roles include: Clarice (La Pietra del Paragone) and Amastre (Serse) for LlantilioCrossenny Opera; L’écureuil (L’enfant et les Sortilèges); Aricie (La Délivrance de Thésée); KatierinaKrupina (World Premiere ‘The Undertaker’ by Tucapsky); Carmen (title role); Mamma Lucia (CavalleriaRusticana); Mercedes (Carmen) for Jigsaw Opera at the Purcell Room; and was a soloist in Berstein’s Mass at the Queen Elizabeth Hall. Yvette premiered the role of Clare in Swindon the Opera at Steam. For Kentish Opera sang the roles of: Garcias in Don Quichotte; Lola in CavalleriaRusticana; Mercedes in Carmen; Buttercup in HMS Pinafore; and Hortense in Not in front of the Waiter, a role she reprised this year at the Wyvern. In 2015 she sang in the world premiere of Nursery Rhymes by Geoffrey Westley also at the Wyvern.

Yvette is a keen recitalist and has performed throughout the UK, France and Ireland and has an extensive oratorio and concert repertoire ranging from Tippet to Purcell and Enescu to Sondheim. She has been featured on Classic FM’s ‘Friday Live,’ BBC Radio 3 and BBC TV as well as on other major independent television networks. Yvette played the part of the Mother in Humperdinck’s Hansel and Gretel. The production was filmed as part of a BBC documentary and was aired as part of their ‘Inside Out’ series.

Yvette was director of Music at Milbourne Lodge School for ten years and many of her pupils have gained music scholarships to Eton, Winchester, St Pauls and Charterhouse School. They have appeared at the Purcell Room, Fairfield Hall and the Royal Albert Hall and have gained entry into the Guildhall School of Music and Drama, Arts Ed,Bird and Urdang. Others have gone on to have successful operatic, musical theatre and pop careers. Yvette’s pupils are very much sought after by the National Youth Choir and New London Children’s Choir. Yvette coached Nottingham University Operatic Society’s production of Marriage of Figaro and was vocal consultant on Cats at the Wyvern Theatre.

Yvette is proud to be on the staff of Wilkes Academy. Her teaching style is a mixture of Estill, Core and classical Bel Canto; she is a member of AOTOS.